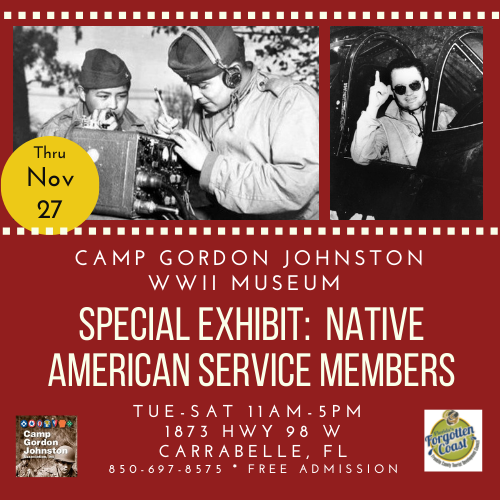 Event Description:
Camp Gordon Johnston WWII Museum in Carrabelle is excited to announce a special exhibit honoring Native American Servicemen. This exhibit will open Tuesday, November 2 and will be on display at the museum until Saturday, November 27. November is National Native American Heritage Month, and the Camp Gordon Johnston Museum salutes their service and sacrifice. The museum and exhibit is open every Tuesday through Saturday from 11 am to 5 pm and there is no charge for admission.

The Code Talkers? role in war required intelligence and bravery. They developed and memorized a special code. They endured some of the most dangerous battles and remained calm under fire. They served proudly, with honor and distinction. Their actions proved critical in several important campaigns, and they are credited with saving thousands of American and allies? lives.?
(Source: The National Museum of the American Indian).

Come to the Camp Gordon Johnston Museum during this special exhibit and learn about the Native Americans who fought for the United States in World War II. Discover the story of the Code Talkers, who used their unbreakable code based on their native tongues to help defeat the enemy.
Location:
Camp Gordon Johnston WWII Museum is located in Carrabelle, directly across from Carrabelle Public Beach Park at 1873 Hwy 98 West
Date/Time Information:
Tuesdays - Saturdays , November 16 - November 27, 2021
11:00 am - 5:00 pm eastern
Contact Information:
850.697.8575
Send an Email
Fees/Admission:
n/a
Set a Reminder:
Business Directory Events Calendar Hot Deals Job Postings Contact Us Weather